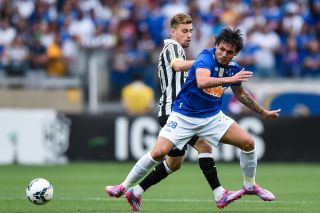 Cruzeiro had dropped points in recent weeks but goals from Marcelo Moreno, Ricardo Goulart and Julio Baptista inspired the league leaders to a much-needed 3-0 victory over Santos at the Estadio Governador Magalhaes Pinto on Sunday.

Bolivian striker attacker Moreno opened the scoring in the 25th minute, albeit with a helping hand from Santos goalkeeper Aranha, who fumbled a routine save into the net in Belo Horizonte.

Goulart - the league's top goalscorer - took his tally to nine goals with Cruzeiro's second of the match just three minutes after half-time.

Former Arsenal and Real Madrid forward Baptista put the result beyond doubt two minutes from time after coming off the bench and firing the ball past Aranha.

Cruzeiro have collected 33 points from 15 games to sit two clear of rivals Internacional, who edged Goias 1-0 on Saturday.

Internacional were helped by Pedrao's own goal in the 77th minute.

Gremio snapped their three-game losing streak with a 2-0 win at home to Criciuma as former Brazil coach Luiz Felipe Scolari notched his first win in charge of the club.

Luan's 11th-minute penalty got the ball rolling at the Arena do Gremio after Lucas Coelho was taken down inside the penalty area.

Coelho was in the thick of the action early in the second half, scoring from long range in the 49th minute.

In other results, Sao Paulo claimed back-to-back wins with a 2-1 triumph over fourth-bottom Palmeiras on Sunday.

Kardec rose highest to head the ball into the bottom corner of the net for his third goal in as many games.

Sao Paulo and Fluminense, who lost 2-0 at Botafogo, are two points adrift of third-placed Corinthians.

Corinthians were held to a 1-1 draw by second-bottom Bahia on Saturday.

Elsewhere, Flamengo continued their resurgence with a 1-0 win over cellar-dwellers Coritiba.

Cleitinho equalised in the 90th minute as lowly Figueirense earned a 2-2 draw at home to Atletico Mineiro.

Sport Recife and Atletico PR drew 1-1, while Vitoria and Chapecoense played out a scoreless draw.