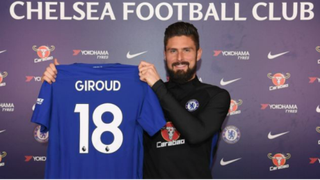 Chelsea have announced the signing of striker Olivier Giroud from Premier League rivals Arsenal for a reported £18million, ending the club's long hunt for a new centre-forward.

Antonio Conte's desire to add another attacking option to his squad led to Chelsea being linked with a host of unlikely players, including Andy Carroll, Ashley Barnes and Peter Crouch, while an attempted deal for Roma's Edin Dzeko failed.

But with Giroud struggling for game-time at Arsenal and with the World Cup approaching, the Premier League champions swooped to secure the 31-year-old on an 18-month contract.

Giroud, who hit 73 Premier League goals at Arsenal in his five and a half years at the club following a 2012 move from Montpellier, has started one league game this season.

The France striker was increasingly marginalised at Emirates Stadium following the club-record arrival of his compatriot Alexandre Lacazette, who joined from Lyon, and his chances of making the starting XI receded further with Wednesday's signing of Pierre-Emerick Aubameyang from Borussia Dortmund.