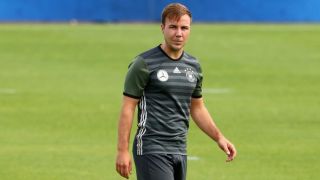 Borussia Dortmund have confirmed the return of midfielder Mario Gotze from Bayern Munich.

Gotze has endured an indifferent three seasons at Bayern after moving from Dortmund in 2013.

The Germany international - who scored the winner in the 2014 World Cup final defeat of Argentina - won back-to-back league triumphs with Dortmund before departing for Munich a year later and returns with three more league titles under his belt as well as two DFB-Pokal medals.

Gotze has yet to undertake his medical but providing there are no issues he will sign a deal up to June 2020 with Thomas Tuchel's side.

Dortmund CEO Hans-Joachim Watzke told the club's official website: "I am personally very pleased that Mario has decided to return to Borussia Dortmund. Ever since his departure in 2013 I hoped he would come back."

Dortmund sporting director Michael Zorc added: "Mario is a Dortmunder, one of the most creative midfielders in Europe and still only 24 years old. He had multiple options available to him but took the decision to return to his hometown club."