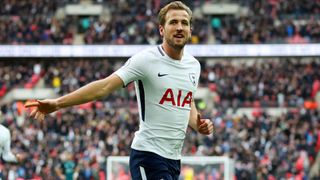 Tottenham have tied star striker Harry Kane down until 2024 after announcing he has signed a new contract.

Kane has established himself as one of the Premier League's elite players in recent seasons after coming through the ranks at Spurs and he has been rewarded for his fine form.

The England striker scored 30 goals in 37 league appearances in the season just finished, making it his best individual campaign in the division after surpassing his haul of 29 from 2016-17.

Kane has regularly been linked with a move away from Spurs, predominantly to Manchester United and Real Madrid, but supporters can breathe a sigh of relief as he looks set to be sticking around for a while yet.

The 24-year-old has been named in the Professional Footballers' Association's (PFA) Premier League Team of the Year in each of the last four seasons and instantly boosts Spurs' chances of once again securing Champions League football next term.

The announcement comes at a particularly important time for Spurs, who are due to move into their new stadium at White Hart Lane next season.

Kane follows coach Mauricio Pochettino in signing a new long-term deal in the past month, with the Argentinian's extension seemingly coming just in time to put Real Madrid off an approach in the wake of Zinedine Zidane's resignation.

Spurs announced the deal in a video on Twitter, as the camera focused on the big screen at Spurs' new stadium before revealing a picture of Kane next to the "2024, new contract" caption.

Kane is currently away on international duty with England and is expected to play a starring role for Gareth Southgate's men at the World Cup.