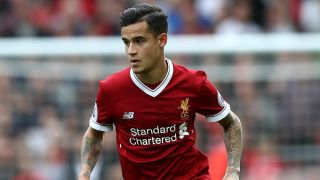 Liverpool demanded €200million for Philippe Coutinho when Barcelona made a deadline day bid to sign the Brazil forward, according to director Albert Soler.

Barca had made Coutinho one of their top targets after Paris Saint-Germain triggered Neymar's  €222m release clause to prise the forward away from the Catalan giants.

But Liverpool rejected a series of bids despite Coutinho reportedly making a transfer request in order to force through a move to Camp Nou.

Coutinho has not played for Liverpool all season due to injury and illness, but he came off the bench and scored in Brazil's World Cup qualifying win over Ecuador on Thursday.

Soler: "After weeks of offers, yesterday Liverpool wanted €200 million for one player. We won't put the club at risk" September 2, 2017

Barcelona subsequently made a late attempt to sign the 25-year-old before the transfer window closed only for Liverpool to request a whopping €200m.

"After weeks of negotiations, yesterday Liverpool asked us for €200m for the player," Soler told a news conference on Saturday. "We will not put the club at risk.

"We have always worked with the mission not to put at risk the heritage and the viability of the club which is owned by the members.

"The fact that PSG came up with €222m [for Neymar] caused everyone to know that the club had money. When you go to the market and clubs know that you have a lot of money, the requests were exorbitant."