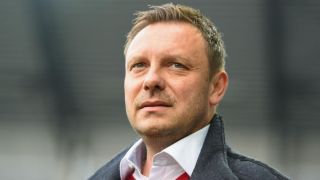 Andre Breitenreiter is demanding a performance full of "passion and heart" from his Schalke side in Sunday's "mother of all derbies" against Borussia Dortmund.

Schalke go into the 147th Revierderby in a poor run of form having won just one of their last four Bundesliga games. They will also be looking to avenge a 3-0 hammering in their last meeting in February - a game in which Dortmund managed 31 shots to just three from the Royal Blues.

Although he is starting to come under pressure, Breitenreiter knows there is no better way of getting the fans back on side than to beat their local rivals.

"Schalke against Dortmund is the mother of all derbies," he said at Saturday's media conference. "The tension is building, we are looking forward to the game and we want to play bold football, anything is possible.

"These kind of games are unique. We need passion, desire and a good gameplan. We will also need to be brave."

Although Dortmund will be without Germany international Marco Reus, their attacking ranks are still well stocked with Pierre-Emerick Aubameyang and Henrikh Mkhitaryan in sparkling form.

"Dortmund have a lot of quick players," Breitenreiter added. "We will need to make sure we are switched on defensively."

Schalke have selection worries of their own with captain Benedikt Howedes definitely out and Joel Matip doubtful while Johannes Geis is suspended.

Leroy Sane, who received a maiden call-up to the Germany squad on Friday, is likely to start in midfield.