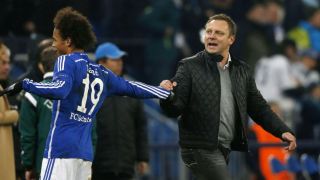 Schalke coach Andre Breitenreiter feels it would be natural for Leroy Sane to contemplate leaving the club amid reported interest from the likes of La Liga giants Barcelona and Real Madrid.

The Germany international has been heavily linked with the Spanish clubs in recent weeks as well as Premier League title hopefuls Manchester City.

Sane, 20, has established himself as one of the Bundesliga's best young players over the past two seasons and sees his contract expire at the Veltins Arena in 2019.

Breitenreiter represented clubs including Hannover and Hamburg during a 19-year playing career and acknowledged he often dreamed of playing for big sides such as Barca or Madrid.

"The fact is that Leroy has a contract at Schalke until 2019," the Schalke boss told Bild.

"But you would have to see how he imagines his future path. I think, however, that he still needs time to mature further, to play and to further establish himself [at Schalke] and with the senior national team.

"For me as a player it was always my dream to play for Barcelona or Real Madrid and of course you have to wonder how many times this possibility exists.

"Leroy must decide for himself, but I am convinced that he is very well cared for at Schalke. Here he can take the next step and then eventually switch to one of two or three world-class clubs and to be able to compete there with the best players in the world."

Sane's future has been the subject of much discussion in recent weeks, with sporting director Horst Heldt repeatedly denying suggestions Schalke had received bids for the player.

Asked whether the speculation had affected Sane ahead of the Bundesliga's return this weekend, Breitenreiter added: "I watch carefully whether something has changed in him and when I notice something, I remind him of his sporting goals.

"But you look at his body language and his commitment and see that he will continue to evolve and I hope it stays that way."