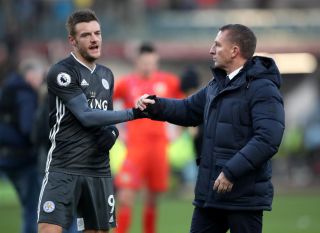 Leicester striker Jamie Vardy is being backed to come through his current ‘nervous 90s’ spell and score a century of Premier League goals.

Vardy is enduring his worst drought for three years as he is on a run of nine games without a goal, to leave him stuck on 97 in the top flight going into Friday night’s clash at Norwich.

Foxes manager Brendan Rodgers insists he is “not worried”, and that “it is only a matter of time before he gets back to scoring goals again”.

“He doesn’t look like the nervous type to me,” said Rodgers of the 33-year-old, who scored in eight successive matches from mid-October through to early December but has now only managed one in his last 12 games. “Sometimes you get a run like it.

“Probably when he came back from his (glute) injury (in late January) he was maybe not quite up to speed.

“But I thought against Manchester City (in Saturday’s 1-0 home defeat), you saw the return of that running power and speed.

“I have no doubt he will get the goals and beyond that. You don’t force it, you don’t put the pressure on, he knows that is his job.

“As long as he is contributing, then I’m fine.”

Vardy’s drought has coincided with Leicester’s inconsistent form since mid-December as City have collected just 15 points from the last 36 on offer.

Rodgers knows others players have to chip in, adding: “If you are needing 65 goals in order to get into a position where you want to be, then it’s no good having a striker with 40 when the others can’t contribute.

“You have threats from various parts of the team, and for long periods of this season we had a central threat with Jamie, and other guys were working hard, and they started to contribute, but it’s dried up a little bit.

“It’s a team responsibility. The strikers are important, but there are other things.

“Look at Roberto Firmino at Liverpool – he’s scored 10, but you look at his influence in the team and what he gives and allows to the other players.

“So it’s not just the goals, it’s the bigger picture. With Jamie, OK, when he’s not scoring, he’s creating space for others.

“But it’s the responsibility of everyone – full-backs, centre-halves, midfield players, front players, and the guys coming off the bench, too, to contribute.”

Rodgers, meanwhile, has confirmed the club is in talks over new contracts with two integral members of the title-winning team in veteran defenders Christian Fuchs and Wes Morgan.

“Both of those players have been immense for me in the time here,” said Rodgers. “It’s not just on the pitch, it’s their qualities off the pitch that are very important.

“It’s so important you have the senior players to drive the standard you create and set as the leader, and both of those guys have been first class with me for that.

“Negotiations with them are ongoing and we’ll see where it takes us.”