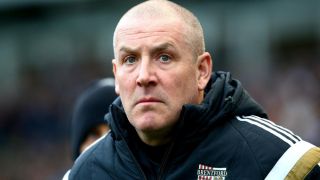 Reports emerged on Tuesday suggesting Warburton's fate was sealed, regardless of whether the club - who sit fourth in the Championship - earn promotion to the Premier League for the first time.

It was said that Brentford owner Matthew Benham envisaged a new direction for the club, who were last in the top flight in 1947 and only came up from League One last season.

The club's response was non-committal on the issue of Warburton's role beyond this campaign, though he does remain in charge at Griffin Park.

"The club is aware of some press speculation about the future of our manager, Mark Warburton," the statement read.

"Given Mark's increasing profile within the game, we recognise that he will deservedly have turned the heads of other clubs.

"As with every other sensibly run club, we plan for various possible eventualities.

"We are a progressive club who do talk to other people within the game to learn about other ways of doing things, and to consider novel strategic approaches to the game.

"Those conversations continue internally, and are part of a healthy dialogue.

"Football is sometimes called a village, and in any village, gossip and rumours can spread like wildfire, whether or not such rumours are true.

"It would not be in the club's interests to disclose any of those discussions, but Brentford FC do want to confirm that Mark Warburton remains our manager.

"The team's performance has been magnificent this season and that is primarily down to Mark's leadership.

"Mark will continue to lead the club in its push for Premier League football.

"At this critical stage of the season, we don't propose to make any further statements in relation to these rumours."

Warburton took the Brentford job in December 2013 and guided them to automatic promotion last season.