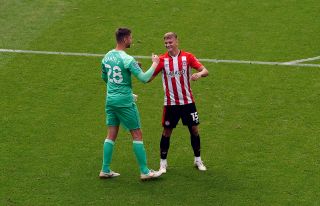 Brentford edged into the Carabao Cup second round with a penalty shoot-out win after their new stadium’s curtain raiser ended in a 1-1 draw with 10-man Wycombe.

Centre back Ethan Pinnock claimed the honour of scoring the first goal at the Bees’ new home just after the half hour mark.

The big defender rose highest at the far post to arrow a header back across goal and in off the upright from Mathias Jensen’s drilled free kick.

But the hero turned villain late in the second half when Scott Kashket seized on his underhit pass to square for Daryl Horgan to smash into the roof of the net from close range.

And Brentford’s win was only sealed when keeper Luke Daniels saved Kashket’s spot kick and Marcus Forss scored in the shoot-out to earn a 4-2 win on penalties against the Championship newboys.

The opening goal was one of only a handful of chances for a Brentford side heavily depleted by international call ups to most of their first-team regulars.

Wycombe made life difficult for the hosts with a high press, and were unlucky not to get on the scoresheet in an evenly-contested first half.

Josh Parker went close to spoiling the party just five minutes in when he guided a header from Joe Jacobsen’s whipped free kick just over the bar.

Brentford always looked dangerous on the counter and went close a minute later, Emiliano Marcondes crossing low into the path of Tariqe Fosu who scuffed his shot wide.

Parker was proving a handful for the Bees defence and his drilled low cross on 16 minutes just evaded the onrushing Alex Samuel, who was inches away from breaking the deadlock for the Chairboys.

Brentford’s opener changed the complexion of the game but Gareth Ainsworth’s side continued to ask questions and Samuel’s dipping drive forced a smart save from Luke Daniels.

The hosts could have gone in two to the good but a neat sweeping move ended with Fosu firing in a dipping volley which Wycombe keeper Ryan Allsop tipped over.

Wycombe’s cause was hampered within three minutes of the restart when Dominic Gape saw red for a reckless follow through on Jan Zamburek.

Brentford came close to stretching their lead but Allsop was equal to debutant Ivan Toney’s point blank shot from Marcondes’ first time cross from the right.

The Bees were almost made to rue that missed chance when Parker raced up the other end and almost caught Luke Daniels out at his near post with a clever low drive.

Sergi Canos skimmed the post with a curling 25-yard drive as the game opened up midway through the second half.

Wycombe’s equaliser gave them fresh hope and they might have nicked it with five minutes to go when a sloppy Canos pass put them under pressure, only a brilliant Daniels save denying Fred Onyedinma.