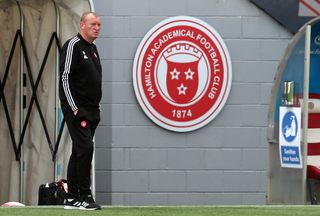 Brian Rice is backing Steve Clarke to take Scotland to a major finals for the first time since the Hamilton boss watched the dark blues in the 1998 World Cup.

The Scots extended their unbeaten run to eight games with a 1-0 Nations League victory over Czech Republic at Hampden Park on Wednesday night and their next game sees them travel to Belgrade next month for the Euro 2020 play-off final against Serbia.

Rice, whose Hamilton side host St Johnstone when domestic football returns on Saturday, believes the current good form of the national side is “absolutely fantastic.”

“We all want the country to do well,” said the Accies boss. “There’s nothing better.

“I was at the World Cup in 98, it was fantastic and it’s time we got back to some sort of championship.

“We had a good team then. You’re going to the World Cup in France, you are playing Brazil in the first game, you are thinking, ‘This is brilliant, Scotland is part of this’, so we need to get back to that.

“I’m sure Steve is the man to take us there, I know he will be.

“We should all get behind the country. We are a great country for criticising.

“So when things go well we should show appreciation and get right behind the boys.”

Accies beat Ayr United 2-1 in the Betfred Cup on Saturday, their first home win of the season and their first win in five matches.

St Johnstone are bottom of the table with seven points, behind St Mirren and Hamilton on goal difference.

Rice revealed defender Jamie Hamilton, who was playing for Scotland Under-19s last week when their game with England was abandoned when Scot boss Billy Stark tested positive for Covid-19 during the game, will miss the Saints match after contracting the virus along with an unnamed youth player.

Rice knows what he is expecting from the game: “Three points, a good performance, carry on the win we got last week.

“It was the first home win of the season and we’re just looking forward to get back in league action,

“We had two cup ties so it is back to league action and we look forward to another home game before we go on a tough run of games away from home.”