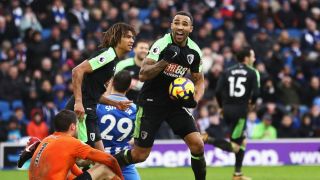 Callum Wilson scrambled home a 79th-minute equaliser as a compelling Premier League contest between Brighton and Hove Albion and Bournemouth finished 2-2 at the Amex Stadium.

Bournemouth edge three points clear of the relegation zone, still two shy of their opponents, who had every right to be aggrieved over not claiming victory.

Visiting boss Eddie Howe warned the visitors against allowing their former striker Glenn Murray any chances to punish them before the match but a routine 48th-minute finish from the veteran looked like it would be enough to seal the points.

But some slapstick set-piece defending allowed Wilson to join Murray on six goals for the season.

Pascal Gross and Jose Izquierdo were the architects of both Brighton goals, the opening coming courtesy of Anthony Knockaert, and looked like being the difference between the sides as they threatened throughout

Bournemouth's first equaliser came when Steve Cook preceded Murray in netting against his old employers and Jordon Ibe struck the post before Wilson earned a share of the spoils.