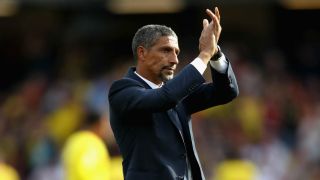 Chris Hughton is hoping to boost Brighton and Hove Albion's attacking options in the transfer market as they head into the international break without a Premier League goal.

The promoted side collected their first point of the season at Watford on Saturday, but their wait for a goal goes on after a 0-0 draw against 10 men, with Miguel Britos dismissed for a woeful foul on Anthony Knockaert.

And Brighton manager Hughton is keen for his men to start collecting wins, with improvement in the final third necessary – possibly through the signing of a new forward.

"I'm pleased we have got off the mark, but also disappointed because the game could have and should have been won," said Hughton.

"[The lack of goals] is a concern, because, on the balance of play and getting in areas we are, we should do better. We need to find a way to win these games, we hit the post twice and feel it is coming.

"I hope we are successful in this transfer window to get a bit more attacking threat. I hope I'll be busy. I can't guarantee it, but we are trying as hard as we can. It is a difficult market."

Watford boss Marco Silva was rather happier with the result, praising his players' spirit after Britos was sent off in the first half.

"It was a difficult match. It started really well for us, we had chances to score," he told BBC Sport.

"After the first chance they created, we lost emotional balance. We need to continue what we did before. The red card changed everything, but after that our players showed good spirit and attitude.

"We controlled our game well; they had more chances – that is normal for a team with 11 men – but we had chances too."