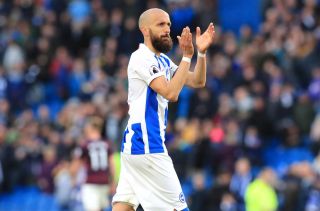 Brighton captain Bruno is to retire after Sunday’s climax to the Premier League season against Manchester City at the Amex Stadium.

Spanish defender Bruno joined the club in 2012 and has gone on to make over 200 appearances. It is hoped he will continue on the south coast in a non-playing capacity.

“He was already a legend here when I arrived as manager, and what he has done since then has been instrumental in our progress as a football club.

“He has been a key figure in our promotion to the Premier League, and in our two seasons at that level too. He is 38, playing in the best league in the world, but his performances have belied his age.”

Bruno was recruited by Brighton on a free transfer from Valencia and has made 17 appearances this season as the club won a successful battle against relegation.

“When Bruno signed for the club in 2012, we knew we were signing a player with proven quality, but what also impressed us was the personality that came as part of the package,” chairman Tony Bloom said.

“Intelligent, honest, compassionate to others and always very approachable, he possessed the perfect traits to eventually become our club captain.

“On the pitch he has been a talisman, a player who has always inspired those around him with his performances, while off the pitch his total professionalism is the reason why, at the age of 38, he has still maintained the very highest levels.

“Bruno has become part of the fabric of this football club, this city, and our relationship will not end with his impending retirement. He will always be a part of us and I wish him and his family all the very best for the future.”