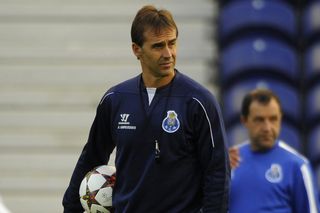 Having lost 3-1 to Sporting Lisbon in the Taca de Portugal on Saturday, Lopetegui's Porto are desperate to get back on the pitch on Tuesday when they will host Bilbao.

The Basque club have not won in eight matches in all competitions, including a 1-1 draw with Celta de Vigo in La Liga on Saturday, but Lopetegui refuses to underestimate Bilbao.

Porto (four points) are top of Group H ahead of Tuesday's game, while Bilbao (one) are bottom.

"It's good to have a game so soon after Saturday because we are eager to bounce back," Lopetegui said on Monday.

"We are looking forward to tomorrow and playing against a good team who will not make it easy for us.

"We conceded goals that were our fault [against Sporting] and we need to improve by being more diligent in our decision making. We are also doing a lot of good things too, so we have to keep doing them well when we play against our most difficult opponents so far.

"The cup game is gone now and we are only thinking about tomorrow. Athletic's placing in the group doesn't reflect their quality - they are better than that.

"They deserved to win their last game, for example, and they are the best team we have faced so far."

Bilbao will enter the continental fixture only outside the drop zone in La Liga on goal difference.

Their coach - Ernesto Valverde - conceded that means he cannot prioritise the Champions League with relegation such a real threat.

Valverde added it will be difficult for Bilbao to recover from their poor start in Europe - they drew at home with Shakhtar Donetsk and lost away to BATE Borisov - and qualify for the round of 16.

"It is clear to see that if we lose, it will be hard for us to qualify for the next phase," he said.

"Porto are a big team, who are used to playing in the Champions League.

"They have a good coach and a great attacking line, with the likes of [Cristian] Tello and Jackson [Martinez]. They are also consistent in defence, making them a strong outfit."