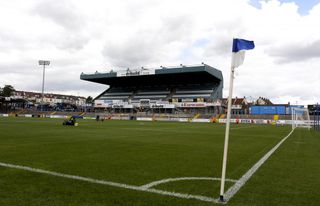 Wycombe were hit with a £10,000 fine by the Football Association last week for breaching agent regulations, thought to stem from winger Matt Phillips' sale to Blackpool in 2010.

The agent in question, Phil Smith, was hit with a six-month ban.

Rovers fell out of the Football League for the first time in their history after a defeat to Mansfield Town on the final day of the season opened the door for Wycombe - who secured a 3-0 win at Torquay United.

However, officials at the Memorial Stadium believe Wycombe should have been hit with a points deduction after "wrongfully obtaining a competitive advantage" as winger Phillips' subsequent move to QPR brought them a windfall thanks to a sell-on clause.

A club statement read: "It has come to the attention of Bristol Rovers FC that Wycombe Wanderers FC appear to have breached FA rules on Third Party Ownership.

"Its current chairman, in giving evidence at a recent FA disciplinary hearing, appears to have admitted a serious breach in respect of the player, Matt Phillips (and possibly other players).

"The result of this led to Wycombe wrongfully obtaining a competitive advantage over Bristol Rovers.

"Without this, Wycombe rather than Bristol Rovers could have been relegated.

"Bristol Rovers were relegated merely on goal difference, and as the breach, if proven, would have almost certainly led to a points deduction, Bristol Rovers have instructed specialist sports lawyers together with Nick De Marco, a leading sports barrister, to draft and send a complaint to both The Football League and The Football Association."