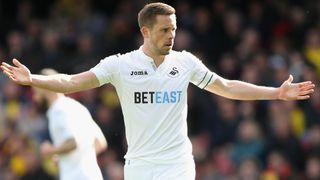 Sigurdsson has been linked with a move to Goodison Park throughout the close-season, with Swansea reportedly holding out for a £50million offer.

Britton accepts his team-mate will almost certainly leave, saying the Iceland international proved his class with nine goals and 13 assists in the Premier League last season.

"His stats last year in terms of assists and goals, you'd think he'd be playing for one of the clubs in the top half of the table," Britton told BBC Radio 5 live.

"He's a big influence in the top end of the pitch for us, but unfortunately the club we're at, Swansea, when the bigger teams come calling it is hard to keep him.

"The club have stood firm. By all accounts they've said they want £50m. I don't know if it's going to get done. I think Everton have maybe offered £40-45m so I think there'll be some movement now and Gylfi will go."

Sigurdsson helped Swansea avoid relegation last season, and his departure would be a blow.

Britton is desperate for the club to invest in a strong replacement should the 27-year-old leave.

"If he does go, it's vitally important that we replace him with the same quality, as much as we can," he said.

Britton added: "You never know, things can change overnight so you live in hope that he will stay.

"But Everton have bid a lot of money before and you'd think they're not too far away from it."