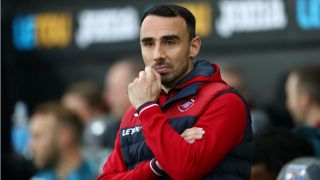 Leon Britton has no desire to take the Swansea City job on a permanent basis after leading the side to a 1-1 draw with Crystal Palace on Saturday.

Club legend Britton was placed in caretaker charge following the sacking of Paul Clement this week and saw substitute Jordan Ayew rescue a point for the Swans, who will spend Christmas at the foot of the table.

Slaven Bilic, Frank de Boer and Ronald Koeman are among the names being linked with the club's vacancy, but Britton - who was only appointed to the Swansea coaching staff last month - believes the opportunity has come too soon in his managerial career.

"I enjoyed it as much as I could," Britton said of the Palace draw. "A lot has been going on the last couple of days.

"I enjoyed being out there. In terms of the full-time job, it is not something I am looking to do at the moment. Maybe down the line, but not at the moment.

"[I was] probably more nervous going into it than when I was out on the sidelines. Out on the touchline, I felt fine.​"

Swansea travel to Liverpool on Tuesday but Britton is unsure whether he will be in charge.

"We will be in training tomorrow ready for Liverpool and will get ready for that until I am told different," he added.

"It is what it is. We will be in Christmas Day and the players need to enjoy time with their families. We need to be ready and prepared for Liverpool.

"We need as many points as we can get. Three would have been great [against Palace].

"We need to settle things down. There are lots of thoughts going through the players' minds."

Crystal Palace boss Roy Hodgson, whose side took the lead through a Luka Milivojevic penalty at the Liberty Stadium, was satisfied with a point that stretches his side's unbeaten run to eight matches.

"I think we looked quite dangerous on the counter and our defence was solid throughout – we really restricted their chances to a minimum, so it wasn't a surprise when we went in front but they scored a very good goal," Hodgson commented.

"It's another point in our fight out of the relegation zone so we're not too unhappy."