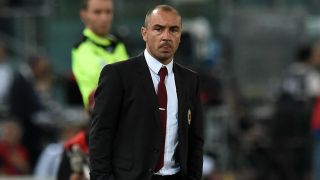 Former AC Milan coach Cristian Brocchi has claimed he was not properly supported at San Siro after taking charge of Brescia.

The ex-Lazio midfielder became Milan boss in April after Sinisa Mihajlovic's sacking, having previously worked with their Primavera youth side.

However, Brocchi could only guide the senior team to a seventh-place finish, and he departed last month, with Vincenzo Montella his replacement.

After being confirmed as the new coach of Serie B club Brescia, the 40-year-old revealed his reasons for leaving Milan.

"I have a very particular personality and am a very humble person," Brocchi told a press conference.

"As a player I achieved great things by starting from the bottom. I found myself in an important family like Milan, a wonderful adventure in the youth academy and had the good fortune to become
coach of the senior squad.

"It is fundamental for me to feel supported, so people have confidence in me.

"We did not have the right conditions to continue, so my decision to walk away was right for the good of the club and the good of [president Silvio] Berlusconi.

"I would not have worked with the right sense of calm. I wanted to show what I can do without prejudice. I am very happy to have become the coach of Brescia, a club that is very important in my life.

"I want to bring my ideas to the locker room with the hope of finding the right synchronicity and achieving success."