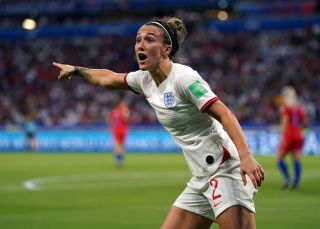 Lucy Bronze has defended England’s penalty-taking after they once again had a spot-kick saved in the Women’s World Cup semi-final loss to the United States.

The Lionesses had the chance to equalise via a penalty in the 84th minute of the 2-1 defeat in Lyon, but captain Steph Houghton saw her effort from 12 yards kept out by Alyssa Naeher.

It was the third time at the tournament that England had failed to convert from the spot, with Nikita Parris, who scored a penalty in the opener against Scotland, being denied by Argentina’s Vanina Correa and Norway’s Ingrid Hjelmseth.

When it was put to Bronze that the penalty-taking had not been good enough, the England full-back said: “I completely disagree to be honest.

“I think Nikita Parris has done some superb penalties and keepers have made some fantastic saves. I think we’re too harsh on the penalty takers sometimes.

“It’s a lot of pressure on a goalkeeper, to pull out a save in the semi-final of a World Cup, to keep their team on top? That’s unbelievable. The Argentina keeper? Absolutely unbelievable save. The same for Norway, the keeper’s made a fantastic save.

“I think it’s a ridiculous comment to say the penalties aren’t good enough, we’ve scored penalties this tournament and we’ve scored them in the past, so I don’t think that’s an issue at all.”

While Houghton said after the match she was “gutted” and felt she had “let the team down”, England boss Phil Neville said “no blame should be attached” to the centre-back.

That was echoed by Bronze, who said: “I’ve spoke to her but Steph knows exactly what we all think of her.

“She’s our captain and it’s not easy to step up in a World Cup semi-final to try to score a penalty. I think everyone in the nation will take their hats off to her for even stepping up to do that.

“It’s a huge amount of pressure to take and just because she’s not scored a penalty the blame is not on her, we’re a team and we win and lose together.”

England playmaker Fran Kirby said: “We’re obviously gutted for her and gutted for the loss as well.

There isn’t any words, absolutely gutted. Proud of this team ❤️ thank you to everyone for your support and we will give everything one more time in the World Cup 🦁 pic.twitter.com/MeKwdmWrbc— Fran Kirby (@frankirby) July 3, 2019

“But Steph’s a strong character and she’ll bounce back from this. She’s a great captain, she’s a great leader and if anyone will be there for someone, it’ll be her.

“So we need to make sure we get around her and make sure that she’s in a good space. And she will be, she’ll come out fighting on Saturday, there’s absolutely no doubt about that.”

Saturday is when England will play for third place, against either Holland or Sweden in Nice.

We pick each other up. We go again. We look forward to the play-off and at the change we’ve made to our nation. At the way you guys have backed us like never before.— Lionesses (@Lionesses) July 3, 2019

Midway through the second half, England thought they had equalised through White, only for her finish to be disallowed on a marginal offside call following a VAR check.

England were then awarded their penalty via VAR, only for Naeher to deny Houghton, shortly before Millie Bright was sent off following a challenge on Morgan.