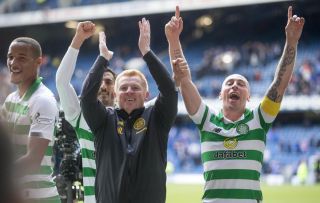 Summer signings Christopher Jullien and Boli Bolingoli came of age in Celtic strips when the defenders helped their team to a comfortable 2-0 victory over Rangers at Ibrox just before the international break.

On-loan Southampton winger Mohamed Elyounoussi and former Kilmarnock left-back Greg Taylor are looking to make their debuts at Hamilton on Saturday after arriving in the final days of the transfer window.

Right-back Moritz Bauer made his debut at Ibrox before two young full-backs, Jeremie Frimpong and Lee O’Connor, moved from either side of Manchester on deadline day.

On Jullien and Bolingoli, Brown said: “Everyone was on their backs early doors but they were fantastic at Ibrox and I think they have set their standard now, and they need to make sure they push on from there.

“So the squad is looking really, really good.”

Meanwhile, Brown described his relationship with Neil Lennon as “brilliant” after the Celtic manager laughed off rumours of a rift with his captain.

Brown added: “Our relationship has always been good. As soon as he came in, he kept me on as captain.

“When he left, we stayed in touch all through his time at Bolton and Hibs, and we met up on occasions as well.

“So there is no rift between the two of us whatsoever. It was good to read though, so keep that coming.”