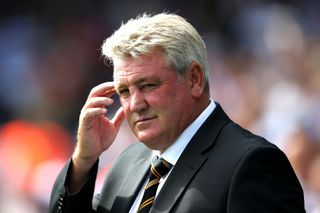 The Scot - signed from Norwich City during the close-season - was forced from the field five minutes into the second half as Hull kicked off the new Premier League campaign with a 1-0 win at QPR.

And manager Steve Bruce concedes that he may be forced to do without Snodgrass for the foreseeable future.

"Snodgrass is a concern", he said. "He's twisted his knee. He's in a brace and crutches at the moment.

"Touch wood he's not too bad, but we fear ligament damage.

"Alex [Bruce] has hurt his back, but we don't think that's too serious."

James Chester put Hull in front seven minutes into the second half at Loftus Road before goalkeeper Allan McGregor was forced to deny Charlie Austin the chance to equalise from a penalty in the closing stages.

But Bruce questioned the awarding of the spot-kick, given for an alleged handball by Chester.

"We lost at West Ham, we lost at Tottenham to similar sorts of things, and I think the referees now have all got to get together and say: 'Listen, we're making a mockery of this'.

"It's supposed to be deliberate. James Chester's got his hand down by his side, the ball's a yard away and the fella hits it, so it's probably travelling about 50 miles per hour from a yard.

"What is he supposed to do?

"Unless we stop all this nonsense and start having a bit of common sense - 20 years ago in my day, that would never have been a penalty.

"Big games could be decided on something like that.

"It would have been unfair, unjust on Chester in particular, who had an outstanding game."