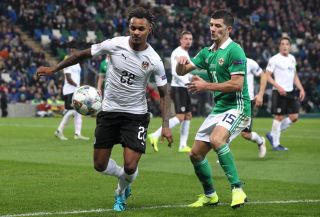 The Magpies have landed 25-year-old Schalke midfielder Bentaleb and Inter Milan winger Lazaro, 23, for the rest of the season, with the former looking to rebuild his career after falling out of favour in Germany and the latter desperate for regular football as he attempts to retain his place in the Austria squad for Euro 2020.

Asked about the pair, a delighted Bruce said: “It just shows that we’ve still got that little bit of a pull where people want to play for a big club with the support we’ve got, and the Premier League is always a pull.

“Lazaro is all about playing and going to the Euros and playing with Austria. We’ve worked extremely hard to pull it off, people behind the scenes as well, because when somebody like him becomes available, then I’m sure there were many suitors.

“There are just not enough top players that we are all looking for, especially in January, so usually you look for a fall-out, like with Bentaleb, or someone who it’s not gone so well with like Lazaro at Inter. For us to get those two, that right quality, is vitally important.”

Bruce confirmed that Bentaleb will start Saturday’s FA Cup fourth-round tie against Sky Bet League One club Oxford – the paperwork for Lazaro’s move was not processed in time for him to figure – with the former Tottenham midfielder keen to prove his worth once again following nine months on the sidelines at Schalke.

He said: “We spoke to Les Ferdinand, Tim Sherwood, people who had him as a young boy. The two of them were glowing about him, so no problem.

“It’s fair to say he will have an argument but he wants to win and I’ve got no problem with that. The people I’ve spoken to, who had him before, had no issues at all.

“I always check up and all the reports I came back with were nothing but positive. He’s got himself into this situation because he’s had a row with someone, but how often have we seen that?”