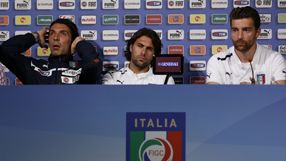 After more than a fortnight away from home, with little to do but go training and assist in the build-up for the next match, both men were accustomed to a life of blissful, if dull, banality and a seat on the substitutes' bench.

Every day must have seemed the same with only a nagging, unwanted, fear that their squad's revered captain and senior goalkeeper Gianluigi Buffon may fall ill, or get injured, occasionally interrupting the routine.

But Buffon, apart from his sheer greatness, his longevity and his inspirational presence, had also re-established a reputation for durability this year, after helping Juventus to the Italian title.

Only an act of unexpected drama, they imagined, could interfere with their habitual long hours of recreation and relaxation in the team's luxury country house hotel.

All this changed on Friday, however, when both were summoned, along with the man widely acclaimed as the world's greatest keeper, to attend a news conference at the Casa Azzurri, the Italian media's home from home at the tournament.

Most reporters expected Buffon, who will make his 118th appearance for Italy when they meet England in Sunday's quarter-final in Kiev, to take centre stage in the Casa's main upstairs interview room.

No doubt De Sanctis, 35, winner of five international caps, and 24-year-old Sirigu, who has two, expected the same - with them despatched to a secondary room with no more than a handful of stray, perhaps equally reserve-status, reporters would act as inquisitors.

Instead, all three goalkeepers were called upstairs where they faced an Italian media corps bolstered by the presence of many English and other visitors.

After a brief and sonorous opening statement, Buffon rested his baritone voice.

The opening question, prompted by concern for the feelings of the loneliest men at Euro 2012, was to De Sanctis.

"[Leonardo] Bonucci says Italy are better than England - what do you think?" he was asked.

It was an invitation to make a foolish answer and, luckily, the Napoli goalkeeper saw it coming.

"I'm not so much in agreement with Bonucci - and not in front of you," he replied, saving himself from embarrassment.

As further questions flew, the two reserves fielded them without difficulty, allowing Buffon to stifle a yawn, scratch his ear and stretch like a lazy lion waiting for passing prey.

Then came a routine question to the established 'numero uno' about his research for the unwanted prospect of a penalty shootout.

"Will Gigi be watching videos with his team-mates?," he was asked.

As the man who could be an opera singer, or a tango star, in another life cleared his throat, Sirigu began to giggle.

It was contagious and Buffon's creased and foreboding face broke into a wide smile.

"Tonight," he spluttered between peals of laughter. "With my team-mates. I will look at a video - and try to document