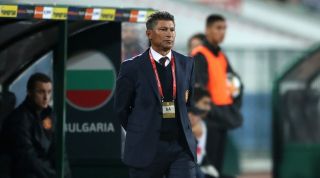 The Three Lions ran out 6-0 winners during a Euro 2020 qualifying match earlier this month, but the game was overshadowed by racist abuse from sections of the home support.

The game had to be halted twice due to the incidents, but Balakov denied being aware of any untoward behaviour in Sofia.

Balakov resigned as manager of the national team last week and has now described his version of events to Bulgarian outlet Sportal.bg, as reported by the Guardian.

Speaking about one of the stoppages in play, he said: “I was talking to [Kieran] Trippier on the touchline and he was the one trying to console me.

“He was saying: ‘No problem, coach.’ [Raheem] Sterling was there as well.

“Suddenly Jordan Henderson came to me and tried to convince me I had heard and seen things I actually hadn’t.

“I told him I hadn’t heard anything. People had come to the stadium to watch football.”

Balakov came in for criticism after the match after saying in his post-match press conference that he hadn’t heard any abuse, and accusing England fans of “whistling and shouting” while the Bulgarian national anthem was played.

“After the match, 99.9% of the questions I was asked by English media were about racism,” he said.

“I’m the manager of the national team but I had to reply to political questions. Then everything that happened on social media was brutal, my entire family and my children became targets of the attacks.

“My words were taken out of the context and were spread all over Europe – as if I were supporting racism. I’ve always condemned it.

“When I was playing I had a lot of black team-mates and I always supported them. We have to fight racism.”