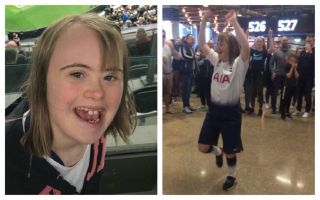 A young Spurs fan with Down’s Syndrome who was trolled after being filmed dancing at the club’s stadium has done so again – but this time with hundreds of other supporters cheering her on.

Ella Markham, 16, made national news after the cruel responses to her father’s video prompted her hero Harry Kane to offer her a place as a mascot.

And when the pair met at the Tottenham Hotspur Stadium, the England striker tweeted: “Amazing to meet Ella before today’s game. So positive and happy! Inspiring.”

Ella and her brother Danny, 11, walked out with the team ahead of kick-off, and after the game the teenager reenacted her enthusiastic dancing in the same spot she was filmed previously.

This time, however, “five to six hundred people” gathered round to watch and support her.

“It was astonishing, even to the point that they had to have stewards there to make sure everything was safe,” her father Neil Markham told the Press Association.

“I knew that Ella would dance because she just does. Any music comes in the car, in the house, she just dances and I think because of everything that’s gone on… everyone knew and made a fuss of her.”

He added: “People were stopping to have photos taken with her in the street. It was like walking around with a celebrity.”

This is me and my daughter Ella. I’ve read certain words on Twitter recently. Please be very careful on here when you use words like ‘retard’ and ‘mong’. Ella’s my daughter and my inspiration. If there were more people like Ella in the world it would be a far better place pic.twitter.com/XI43QYKAYr— Neil Markham (@NeilMarkham1) December 9, 2018

Mr Markham said the family had received “at least 100,000 replies” since the original video was posted.

“I’d love to be able to reply to every person individually,” he said.

“There were a couple of people that tried to be a bit smart yesterday but for every one of those there are two or three thousand that are really positive and really decent people.”

Wow! Thank you so much for making this happen. Special day for our family. England captain, spurs legend and Ella’s hero https://t.co/WQ4mIKCnNg— Neil Markham (@NeilMarkham1) May 12, 2019