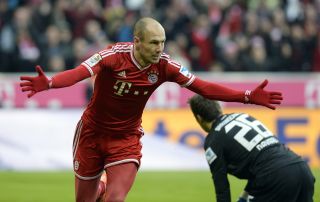 Pep Guardiola's side were in complete control at the Allianz Arena after Arjen Robben broke the deadlock in the second minute.

They went on to have over 80 per cent possession and doubled their lead as Robben netted his second with a trademark finish cutting in from the right – his sixth goal of the season.

Braunschweig failed to test Manuel Neuer in the opening half but did have two openings after the break that the Germany international was able to save.

Moments after Robben had gone close to netting his hat-trick David Alaba made a sensational goal-line clearance to deny Karim Bellarabi and secure the victory.

The league leaders made two changes with Daniel van Buyten replacing Jerome Boateng at the heart of the defence and Thiago Alcantara taking the injured Philipp Lahm's role in midfield.

Braunschweig also made two changes with Marco Caligiuri and Simeon Jackson coming in for Damir Vrancic and Timo Perthel.

Any hopes the visitors had of containing the defending champions were dashed in the second minute as Robben opened the scoring with Bayern's first effort on target.

Thiago lifted a perfect ball over the defence for the Netherlands international, whose initial effort struck the post, but rebounded kindly for the winger to stoop and head home.

The early goal appeared to take the tempo out of the game, with Bayern dominating possession and patiently waiting for an opening.

And it came after 20 minutes from a left-wing corner, Dante rising highest to head towards the top corner only for Norman Theuerkauf to clear off the line and deny the Brazilian his first goal of the season.

Pep Guardiola's side did not have to wait long for the second goal though, as Robben grabbed his second 10 minutes later, typically jinking in from the right and firing home from 15 yards.

Braunschweig had two sights of goal in the opening minutes of the second half, but Simeon Jackson and Ermin Bicakcic were unable to convert.

Robben went close to claiming a hat-trick with a 72nd-minute free kick, he lifted the ball over the bar and beat Daniel Davari for pace but the ball clipped the top of the crossbar on its way over.

Bellarabi went close twice in the closing stages, but his long-range effort, after Neuer had rushed from his line, was acrobatically cleared by Alaba and the 23-year-old also saw a deflected effort clip the bar as Bayern just preserved a third consecutive clean sheet in the league.