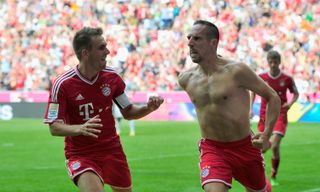 The champions dominated from the outset at the Allianz Arena but it took until after the hour for Ribery to open the scoring, and Robben added a superb second shortly after to make it three wins from three for Pep Guardiola's men.

Guardiola handed starts to close-season signings Mario Gotze and Thiago Alcantara for the clash at the Allianz Arena, with Gotze making his debut. Michael Wiesinger kept Hiroshi Kiyotake on the bench for Nuremberg.

Bayern unsurprisingly controlled the opening stages of the game, keeping possession from their Bavarian neighbours with ease as they probed for the opening goal.

However, it was the visitors - who have not won at Bayern for 21 years - who almost broke the deadlock against the run of play after 15 minutes as Daniel Ginczek’s thunderous strike was tipped onto the crossbar by Manuel Neuer.

Wingers Ribery and Robben both threatened for Bayern in glimpses, and the home fans thought they should have been awarded a penalty in the 24th minute. Mario Mandzukic was bundled over by Marvin Plattenhardt, but the hosts' protests were waved away by referee Felix Zwayer.

Bayern did not have to wait long for a penalty though as the official pointed to the spot seven minutes later after Robben was brought down while chasing a throughball.

However, David Alaba's weak effort from 12 yards was saved comfortably by Raphael Schafer.

The home side continued to dominate all aspects of the match after the break but for all their attacking intent, struggled to break down the stubborn Nuremberg defence.

Mandzukic's aerial ability offered a major threat for Bayern as they began opting for a more direct approach. A powerful header from the Croatia international almost opened the scoring shortly before the hour mark as Guardiola's side continued to pile on the pressure.

The Spaniard introduced Thomas Muller and Toni Kroos from the bench as Bayern looked to up the tempo and Muller was inches away from converting Robben's searching pass shortly after.

However, a sense of relief was felt throughout the stadium as Ribery finally got the breakthrough for the hosts in the 68th minute. With Wiesinger's men camped on the edge of their own area, a pin-point Philip Lahm cross allowed the France international to accurately guide a header past the helpless Schafer.

And Robben then sealed the three points nine minutes later with a fine solo effort. The Netherlands international coolly slotted the ball home from close range after jinking past three defenders down the right wing.