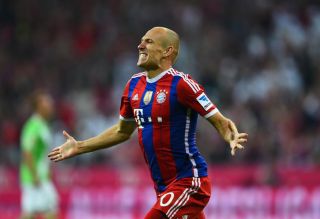 Despite looking somewhat rusty in the early stages of Friday's clash, the reigning champions were soon in control and took the lead through Thomas Muller eight minutes before the interval.

The home side were two up within a couple of minutes of the restart courtesy of an Arjen Robben strike, but Ivica Olic pulled one back for Wolfsburg with a well-struck curling effort five minutes later.

Robert Lewandowski - making his league debut for the Bavarian giants - should have put the result beyond doubt when he found himself one-on-one with goalkeeper Max Grun, before substitute Junior Malanda missed a golden opportunity to claim a share of the spoils.

The hosts' contingent of World Cup-winning Germany internationals were recognised in front of their home fans before kick-off, and it was one of the heroes of Brazil who had the first shot on goal.

Muller collected the ball from a long-range Philipp Lahm pass, but his effort from a tight angle was comfortably collected by Grun.

Bayern were not having things all their own way, and a mistake by Manuel Neuer in the 16th minute almost opened the door for Wolfsburg to break the deadlock through Olic.

The hosts, though, looked like they were beginning to find their feet, and Lewandowski was at full stretch to meet another Lahm ball with a volley shortly before the half-hour mark, drawing a superb one-handed save from Grun.

And that pressure eventually told when Muller got the slightest of touches to a Robben cross from the right, diverting the ball beyond a helpless Grun.

Bayern doubled the advantage less than two minutes after the break as Robben exchanged passes with Lewandowski before sneaking the ball inside the left-hand post.

Former Bayern striker Olic pulled Wolfsburg right back into the match five minutes later with a wonderful left-footed curling effort that went in off the underside of the crossbar.

Lewandowski should have had a goal of his own to celebrate two minutes before the hour mark, but was unable to lift the ball over Grun, before David Alaba sent a potentially threatening free-kick straight at the goalkeeper.

Wolfsburg came even closer to finding the net 10 minutes from time. Max Arnold whipped in a cross to Malanda, whose effort deflected off Neuer onto the crossbar, and the striker was unable to sort his feet out as he inexplicably touched the ball wide from the rebound.

Sebastian Rode saw a goal chalked off for offside and Robben clipped the bar as Bayern sought comfort, but two goals proved to be good enough to see off a stubborn Wolfsburg and start their season with a win for the third year in a row.