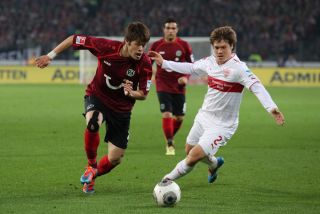 Huub Stevens' side had the better of the play throughout at the HDI-Arena, but visiting goalkeeper Ron-Robert Zieler was in fine form.

Cacau could have also secured a precious three points for Stuttgart, but wasted a glorious opening after the interval.

The draw leaves Stuttgart five points clear of Hamburg, who occupy the relegation play-off spot and visit Augsburg on Sunday, with three games to play.

Daniel Didavi was lively early on for Stuttgart, firing one effort wide and another too close to Zieler, in a prelude of their match-long battle.

Stuttgart were dominant, and had the ball in the net 16 minutes in as Cacau deflected Ibrahima Traore's effort in, but the former Germany striker was offside and the goal was disallowed.

Hannover were dealt a blow as Didier Ya Konan was forced off injured six minutes before the break, while Cacau wasted a gilt-edged chance eight minutes into the second period after more fine work from Didavi.

The hosts nearly snatched a winner of their own late on, Lars Stindl denied by Sven Ulreich, but the point effectively secures their top-flight status as they sit nine above Hamburg.