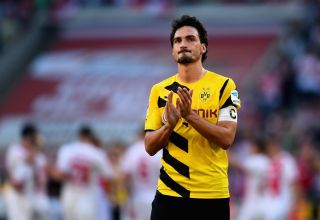 Jurgen Klopp's men have endured a torrid Bundesliga campaign to date and currently find themselves on a six-match winless league run, with five of those matches ending in defeat.

That uncharacteristic run of form sees Dortmund languishing down in 15th, just three points off the foot of the table.

However, after picking up a 3-0 victory at St Pauli in the DFB-Pokal on Tuesday, Hummels senses a potential upturn in fortunes, despite the magnitude of the task that lies ahead.

"We've never had to go through anything like this, it dents your confidence," he said. "But we've taken a great step forward [against St Pauli].

"We've got a big game coming up on Saturday. It's a massive challenge, but if there's one game that's going to get confidence levels up, it's the one against FC Bayern."

Dortmund won 2-0 the last time these sides met in the DFL-Supercup, but their domestic form has nosedived since the August showpiece.

Bayern chief executive Karl-Heinz Rummenigge's declared his interest in Dortmund attacker Marco Reus earlier this week and the timing of his comments should add extra needle to this weekend's clash.

Pep Guardiola's reigning champions, who remain unbeaten in the league, currently hold a four-point advantage at the top of the Bundesliga and two of the sides involved in a three-club chasing pack go head to head on Sunday.

Borussia Monchengladbach held Bayern to a 1-1 draw last time out and host Hoffenheim this weekend, while the other member of that trio of teams who sit on 17 points, Wolfsburg, visit Stuttgart on Saturday.

Bayer Leverkusen - a point further back in fifth - travel to Hamburg having snapped out of a run of three consecutive draws with a 1-0 win against Schalke last weekend.

Like Dortmund, bottom side Werder Bremen picked up a morale-boosting victory in the cup on Tuesday, but are still to register a win in the league.

Bremen visit Mainz on Saturday, with the hosts suffering their first league defeat of the season at Wolfsburg last time out.

Freiburg will also be looking for a first win of the season at Cologne.

Elsewhere, Schalke aim to bounce back from their first defeat under Roberto Di Matteo against Augsburg, Eintracht Frankfurt will be keen to avoid losing a third match in a row when they visit Hannover and Paderborn play host to Hertha Berlin.