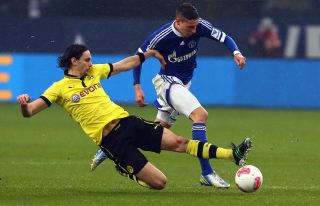 Jens Keller's men welcome Dortmund to the Veltins Arena knowing victory could see them move into the top four as they look to recover from a difficult start to the campaign.

And the hosts should take confidence from their performances last season, when they took maximum points from both their encounters with Jurgen Klopp's charges.

However, Schalke were beaten 3-0 by Chelsea in the UEFA Champions League in midweek, and go into the game with a number of injury concerns.

Attacking midfielder Kevin-Prince Boateng (knee) is a doubt, while striker Klaas-Jan Huntelaar and midfielder Marco Hoger (both knee) are unavailable, along with winger Jefferson Farfan (groin).

Midfielder Anthony Annan and forward Chinedu Obasi, who are lacking match fitness, are also on the sidelines.

Dortmund are in superb form going into the contest, having lost just two of their last 14 games in all competitions.

Klopp is eager to atone for last year's defeats to Schalke, which he said hurt more than losing out to Bayern Munich in the Bundesliga and the UEFA Champions League.

"When you sign a contract at Borussia Dortmund, the first thing you learn is that there are 32 Bundesliga games and two derbies," he said.

"The results last year hurt me the most. If we had played better, the results would have been better. Those defeats are the dark clouds over our last campaign, which, even without a title, was still pretty good otherwise."

Dortmund - who beat Arsenal 2-1 in the Champions League in midweek - will be boosted by the potential return of midfielder Sebastian Kehl, who is close to a return from a foot injury, but attacking midfielder Ilkay Gundogan (back) and defender Lukas Piszczek (hip) are still out.