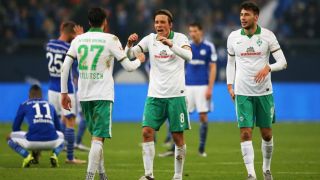 The Bremen captain marked his 300th Bundesliga appearance by scoring and providing two assists in a 3-1 win, while Meier completed a hat-trick in injury time as Frankfurt triumphed 3-2.

Joel Matip gave Schalke the lead inside four minutes at the Veltins-Arena with a looping header, but Andre Breitenreiter's side were unable to build upon the advantage and Fritz equalised two minutes before the interval with a brilliant strike from 25 yards – his first top-flight goal since August 2011.

The Bremen midfielder teed up Claudio Pizarro for an easy finish eight minutes after the interval, the Peruvian notching his 179th Bundesliga strike to join Stefan Kuntz in sixth position on the all-time scoring charts.

Anthony Ujah completed the scoring off a pass from Fritz with 89 minutes on the clock, opening up a four-point gap to the relegation zone as Schalke failed to capitalise on the points dropped by Champions League qualification rivals Borussia Monchengladbach and Bayer Leverkusen a day earlier.

Wolfsburg also failed to gain ground on their rivals for European football as a trio of strikes from Meier - the last of which came in the 93rd minute - consigned them to a 3-2 defeat.

Things did not start out well for Armin Veh's side - they were whistled off at half-time at the Commerzbank Arena after going behind to Dante's back-post strike midway through the first half.

However, Meier turned things around, rifling home his first shot of the afternoon from Stefan Aigner's knock-down before putting the hosts ahead with his second in the 73rd minute.

Andre Schurrle restored parity with his first Bundesliga goal of the season six minutes later but Meier struck at the death, pouncing on the ball after Naldo failed to deal with a cross from Marco Fabian – the Mexican enjoying an impressive debut - and sending his side up to 13th position with three valuable points.