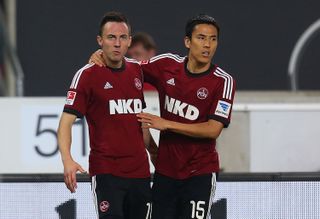 Verbeek took over on Tuesday with Nuremberg without a win from their first nine Bundesliga games of the season.

A frantic opening to the game saw Vedad Ibisevic open the scoring from the penalty spot, only for Josip Drmic to level matters, all inside the opening 10 minutes.

Dutchman Verbeek could not go on to guide the Bavarians to their first victory, but will have been pleased with their performance as they came back from a goal down to earn a share of the spoils.

Stuttgart - looking for their first win in four - took the lead just three minutes into the game as Ibisevic converted from the spot after Niklas Stark had felled Alexandru Maxim in the area.

However, Nuremberg's response was almost immediate as they levelled a mere three minutes later, Swiss striker Drmic's effort going in off the post following an excellent throughball from Timothy Chandler.

Stuttgart went close to re-taking the lead midway through the first half as winger Ibrahima Traore's cross-cum-shot struck the crossbar.

And it was the hosts who continued to do most of the pressing in the closing stages of the first half, midfielders William Kvist and Martin Harnik both spurning clear-cut chances.

Christian Gentner headed wide for Thomas Schneider's side early in the second half, before Nuremberg substitute Daniel Ginczek saw an effort deflected wide of the right-hand post.

That would prove to be the last real chance of the game, though, as both teams settled for a point.