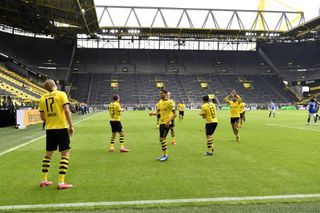 Borussia Dortmund managing director Carsten Cramer says there is no chance of the Bundesliga getting ahead of itself despite the successful return to action.

The top two tiers of the German league returned amid the coronavirus pandemic over the weekend, becoming the first major league to do so.

Dortmund kicked off the Bundesliga weekend with a 4-0 win against arch rivals Schalke and their managing director says “relief” rather the complacency is the overriding feeling.

“I think it’s one step we made, and it’s still a long run we have to run,” Cramer said at Leader’s in Sport’s online forum.

Borussia Dortmund's Carsten Cramer talks through how the club handled their existing partnerships, in the absence of live football. #LeadersWeekpic.twitter.com/YUmojpbnzF— LEADERS Business (@LeadersBiz) May 19, 2020

“And don’t make a mistake just because of a small success of one weekend, try to make the next step as soon as possible.

“We accept all the rules. The rules make sense and there is no space for more interpretation, and maybe for some more openness – I’m talking about the special needs of the football sector.

“We agreed to the rules, we got along with them and it’s our obligation now to go straight forward, not to lose focus, and to be concentrated and to be humble because another eight matchdays are just in front of us.

“It’s just, as I said before, a small step we have made. Nothing.”