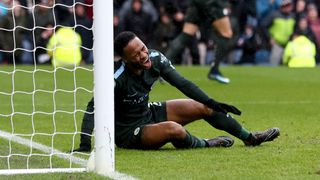 Pep Guardiola's prediction of a "complicated" trip to Burnley proved to be correct, as the Clarets made the most of Manchester City's wastefulness to snatch a 1-1 draw on Saturday.

Despite their profligacy, City had looked on course for a battling win, until Johann Gudmundsson popped up in the 83rd minute to snatch a point.

City boss Guardiola was forced to shrug off claims from Manchester United counterpart Jose Mourinho that the destination of the Premier League title is already certain, with the leaders enjoying a 15-point cushion at the top.

That advantage was 16 points by the full-time whistle at Turf Moor, and City are just eight wins away from securing a third title, although they were reminded of the league's many hazards by Sean Dyche's obdurate outfit.

The Burnley backline could do nothing to stop Danilo's long-distance rocket midway through the first half, but City's failure to add to their tally left the game on a knife-edge, with Raheem Sterling guilty of two shocking close-range misses.

After Aaron Lennon's fierce shot was tipped onto the post by Ederson, Burnley kept at it and Gudmundsson kept his cool to deny them a win.

7 - Johann Berg Gudmundsson (7) has been involved in more goals than any other Burnley player in the Premier League this season (two goals, five assists). Pounced.February 3, 2018

Guardiola had rightful gripes about rough treatment in recent matches against Cardiff and West Brom, but the first 15 minutes were notable for returning captain Vincent Kompany dishing out the pain, with Ashley Barnes, Sam Vokes and Nick Pope all coming a cropper in challenges with the Belgian.

The goalkeeper came to harm while he and Kompany were caught between a deflected cross as City began to gain a foothold in the contest, but the opener came in much more aesthetically pleasing circumstances.

With Burnley caught deep in their box preparing for a corner, the ball was worked through Bernardo Silva to Danilo 25 yards out and the Brazilian full-back had ample room to pick out the top-right corner with a scorching shot.

Guardiola's side could not press home the advantage, however, and Mee twice went close to an equaliser, first drawing a sharp save out of Ederson as City looked for an offside flag and then heading wide from a corner.

Kevin De Bruyne had regular room to roam in the middle and stung Pope's hands after one such charge five minutes before the interval and Sergio Aguero could not make the most of similar freedom in first-half stoppage time.

Sterling's shaky second half began when he spooned wide from Aguero's surprise cut-back and the same corner routine that led to the goal was attempted, but Pope was equal to Danilo's effort this time.

Burnley were almost rewarded for clinging on when Lennon found space on the right, only for Ederson to tip his lashed effort onto the woodwork but City ought to have put the game to bed in the 71st minute when De Bruyne dissected the right channel for Kyle Walker, whose whipped ball begged to be scored, only for Sterling to scuff off-target from barely a yard.

Sterling furiously thumped the turf, but Guardiola's anger was more decisive and the England attacker was soon hauled off.

If City thought they had rode out the storm, Burnley's next attack rocked them, Matt Lowton's deep cross catching out a high line, which Gudmundsson ghosted behind to prod home and deny City a Premier League win for just the fourth time this season

25 - This is the first time Man City have failed to win a Premier League match in which they scored first since a 2-2 draw at Arsenal in April 2017, ending a run of 25 consecutive wins. Rue.February 3, 2018