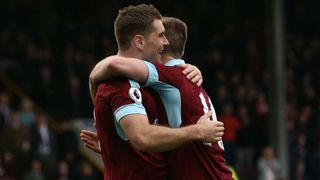 Last weekend's 2-0 victory at Crystal Palace - a first league success on the road at the 18th attempt this season - had the Clarets on the brink of securing their top-flight status after previous failed attempts in 2009-10 and 2014-15.

Stellar home form has provided the foundation for Burnley's successful campaign, with 33 of their 40 points coming in front of their own fans.

It looked as though those supporters would be able to celebrate survival being assured when Vokes put Burnley ahead early in the second half following good work from Ashley Barnes.

But Salomon Rondon's first goal in 19 games - and West Brom's first in six matches - levelled matters and Craig Dawson, on his 27th birthday, headed the Baggies in front from a corner 12 minutes from time.

Burnley were not to be denied an equaliser, though, Vokes beating Ben Foster to Robbie Brady's delivery four minutes from the end to snatch a point - one that will secure survival if third-bottom Swansea City fail to defeat Everton later on Saturday.

Both sides created half-openings inside the first 30 minutes, Rondon twice seeing efforts blocked behind either side of Foster sticking out a leg to keep out Vokes' flick at the near post.

George Boyd blazed a half-volley over as Burnley continued to press before James McClean produced a terrific covering challenge to deny Scott Arfield a shot on Foster's goal inside the area.

Arfield was involved again two minutes into the second half, swinging over an excellent left-winger corner that found James Tarkowski, who ought to have done better than power a free header over the crossbar.

Burnley did go ahead in the 56th minute, though, as Barnes and Vokes combined to good effect.

Barnes broke into the right-hand side of the box and although he was wrestled to the ground by Jake Livermore with the assistant signalling for a penalty, referee Mike Jones waved play on and the striker got to his feet to square for Vokes to sweep home from close range.

The advantage lasted only 10 minutes, however, as the Baggies responded strongly.

Dawson struck the bar from a corner and as West Brom recycled the ball, a diagonal pass caught out Matt Lowton and freed McClean down the left.

His pull-back took a deflection and found Rondon, who held off his man and spun to slam home from just outside the six-yard box.

Dawson, once a transfer target of the Clarets, headed home Chris Brunt's superb set-piece delivery to put the Baggies ahead, but they could not hold on as Vokes glanced home substitute Brady's free-kick to push the hosts closer towards their goal.