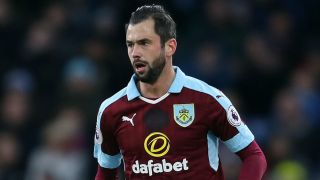 Burnley's stuttering start to 2018 has taken another blow with Steven Defour to miss at least two months with a knee injury.

The midfielder will undergo surgery to repair cartilage damage, robbing Sean Dyche of a key figure in the Clarets' impressive season to date.

Defour started all 24 of his side's Premier League fixtures prior to the injury, scoring once in the 2-2 draw with Manchester United on Boxing Day.

The setback also clouds the 29-year-old's chances of appearing for Belgium at this year's World Cup in Russia.

He was a member of the squad that reached the quarter-finals in 2014 and has won 52 caps for the Red Devils.