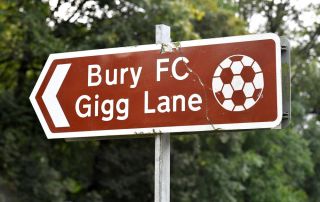 Bury have expressed their “astonishment and dismay” at the English Football League following its decision to expel them from the competition.

The Shakers’ EFL membership was withdrawn by the governing body late on Tuesday night following the collapse of a takeover and after the League One club had failed to show they could pay their debts.

But Bury said they could not understand the EFL’s decision, claiming they have shown they have received another takeover offer from “a credible bidder”.

Bury said in a statement: “Everyone connected with Bury Football Club were shocked and disappointed with the EFL’s decision to expel this wonderful, historic, community driven club from the Football league. This decision was taken despite a credible new bidder being made aware to them before Tuesday’s 5pm deadline.

“Given this, all staff, players and no doubt fans of Bury Football Club are utterly devastated that despite the new bid to buy the club, the EFL have informed us that they will not be rescinding their decision.

“This is something we are struggling to comprehend as the new bidder has proven significant funds to the EFL, funds to allow them to takeover, run and secure the long-term future of Bury Football Club. Everyone at the club believed that such the capabilities of the potential new owner, this would’ve started a brand new era for the club, seeing it go from strength to strength.

“The extreme lack of communication from the EFL has left all involved with Bury Football Club astonished and in dismay.”

Bury said they were now examining what their next step will be and stressed their disappointment at the EFL’s “dismal” communication.

“As a club, we are still pursuing other options, based on the outcome of where the EFL place us. Again, we would like to reiterate that the lack of communication from the EFL has been nothing short of dismal throughout this process.

“Thank you to all the supporters for staying patient with us while we try to provide you with updates as frequently as possible.

“We are truly grateful for all your thoughtful messages, proving once again the brilliance of the football family.”

Meanwhile, former Bury boss Ryan Lowe has denied claims he overspent on players during his time at Gigg Lane and says he actually saved the club £1million.

Lowe guided Bury to promotion from Sky Bet League Two before joining Plymouth in the summer, but the former striker has since been accused of overspending to achieve that success.

“I could blow you away with the figures, they were very low,” said Lowe on Sky Sports’ The Debate Live show.

“There were players on big money, which I never gave the contracts out to. Previous managers and chairman did.

“I’ve heard players on £8-9,000 a week, never in a million years, no one was on that type of money. Even old contracts, nowhere near.

“What was there beforehand I can’t disclose, but I spent around £1.2-£1.3million on 12-13 players and I used the best players I could that were already there. That’s not a lot of money. Yes, there were players there on decent enough money but that was out of my control.”

Bury won promotion last season by finishing runners-up to Lincoln, with Lowe’s side claiming 79 points from their 46 games.

But their financial problems were already apparent after Steve Dale had purchased the club from previous owner Stewart Day in December 2018.

Asked whether he was angry by the allegation that promotion had been achieved with players earning too much money, Lowe said: “It’s an insult, but it’s an insult off keyboard warriors. Footballing people know about budgets.

“I’d like to think the budget I had when I first took over the football club was competitive. But some people have criticised me and said ‘you’ve done this with big money’. No, I haven’t.

“When the previous manager was there we had an outrageous budget and I’d like to say I saved the club a lot of money before the new owner came.

“With the old owner, I slashed a million pounds off the budget straight away by getting rid of a lot of players who I didn’t want and didn’t fit my criteria.”