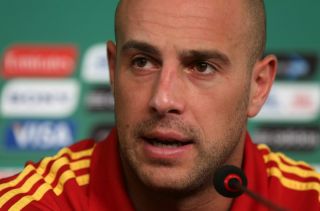 Shot-stopper Valdes, 31, has already flagged his departure from the Catalan club at the end of the season - the only place he has called home in a senior career spanning 13 years.

And Busquets said fellow Spanish international Reina - who is currently being loaned out by Liverpool to Napoli - would be a welcome replacement for Valdes.

"There's nothing we can do. Knowing him, there's no way he'll stay," Busquets said of Valdes.

"He's made his mind up and we just have to enjoy having him here for what's left of the season."

On Spain coach Vicente del Bosque snubbing Valdes for their most recent World Cup qualifier against Finland in September, Busquets refuted the suggestion Iker Casillas - the Real Madrid goalkeeper - was undeserving despite having played fewer minutes leading up to the clash in Helsinki.

"Casillas playing (for Spain) isn't unfair, it's up to the coach," Busquets said.

"They are three top keepers, irrespective of whether Casillas has had less game time."

On Barcelona's newest star, Neymar, Busquets said the Brazilian had settled into Catalonia quicker than expected.

"We've been surprised by how quickly he's (Neymar) adapted, because it wasn't easy, bearing in mind his age and it's a new country and a different playing philosophy," Busquets said.

"He mostly hangs out with the other Brazilians but gets on really well with everyone.

"He's under no illusions and he always wants to learn.

"He's got a different role than at Santos and he's aware of that."