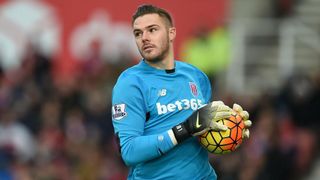 Butland made a pair of outstanding saves from Olivier Giroud and also denied Alex Oxlade-Chamberlain as Stoke held firm in a tight match at the Britannia Stadium on Sunday.

Some are tipping the former Birmingham City player to challenge for Joe Hart's place as England's shot-stopper at Euro 2016.

And while the 22-year-old confirmed he has long-term designs on his country's number one shirt, for now he is focused only on improving his game.

"Of course, it's a target for me. I'm a long way from that, I'm a lot of experience short from where Joe's at," Butland told Sky Sports.

"He's an established Premier League goalkeeper that rightly deserves to be where he is so, for me, it's my first Premier League season, I just want to play as well as I can and give myself the best opportunity to play."

Butland has made 81 saves this season in the Premier League, more than any other goalkeeper, with a block in the first half from a Giroud strike among his best.

"Giroud ended up in a good position," Butland said.

"Sometimes as a keeper you've got to assess whether you can make the ground up and get there and make a block or not and you've got to stay on your line, but I felt I could impact his decision and thankfully managed to get a block on it."