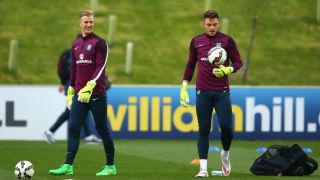 Butland broke his ankle in his country's 3-2 friendly win away to Germany in March, prematurely ending his season and ruling him out of Euro 2016.

Banks, who won 73 international caps between 1963 and 1972, thinks then-manager Roy Hodgson would have dropped Hart for Butland after the Manchester City shot stopper's mistake for Gareth Bale's goal in England's group-stage win over Wales if he had the chance.

Hart went on to make another error as England crashed out at the last-16 stage to Iceland and Stoke icon Banks thinks the time is right to bring in Butland.

"Hart made a couple of bad mistakes but we all make mistakes," he told the Daily Express. "Everybody does that and you can't just hammer him because of it.

"He is reasonably good, but remember Jack Butland at Stoke City got injured in that international friendly. I'm pretty certain that after that first mistake Hart made that Hodgson would have popped Butland in.

"Whoever gets that job of managing the England side, I would be really disappointed if he doesn't straight away play Butland.

"As you know he got injured. But this lad, when you see him play, looks a brilliant goalkeeper. He's only 23 so this is the time to get him in there and give him the experience."

Prior to his injury, Butland had won four England caps since making his debut in August 2012 and Banks has been impressed with his development.

Banks added: "I have been told how much he practises, how hard he works in training and that's good.

"His positional play when he comes for crosses, his agility to get in the corners. Honestly, I'm pretty certain that he will become the next England goalkeeper. He's the man."

Hodgson resigned after England's Euros exit, meaning the goalkeeping decision will fall to his replacement, who is yet to be appointed.