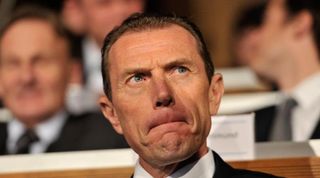 As European champions, Carlo Ancelotti's side will begin their quest to win the title in Morocco at the semi-final stage, playing the winner of Cruz Azul and this year's AFC Champions League victors.

The tie will take place on December 16 - in between La Liga fixtures against Almeria and Sevilla and before the mid-season break takes effect in Spain.

It means, as things stand, Real have five fixtures to contend in December with either the final or the third-place play-off also added into the mix.

However, Real legend Butragueno, now director of institutional relations, insists the club will take the competition seriously despite their other commitments.

"I think this is a fantastic competition. After many years we were able to win the Champions League. We are here to do our best and to make our fans happy," he said.

"It's going to be a very tight schedule that month so for that reason we have to prepare very well for every game. We are going to play the last game in our Champions League group one week before coming here.

"And the last weekend before coming here we are going to play against Almeria. So yes, we're going to have a difficult period and we have to prepare properly.

"I hope that we are going to come here with our best players without any problems in terms of injuries, and be able to prepare for the competition in the proper way to win it."