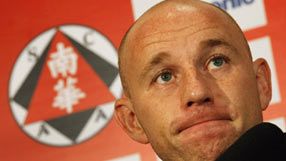 The 35-year-old said he would decide "within the next couple of days" whether to stay on into the new year and help South China in their AFC Cup campaign.

"This is what I was looking for - something new and exciting," said Butt, who retired when he left Newcastle United at the end of May.

"I have played 18 seasons in the Premiership and having done that, I wanted a new challenge," he told the South China Morning Post.

South China's chairman Steven Lo Kit-sing said he was thrilled to have Butt turn out, and that he hoped the former international bring the crowds to his club.

"He has come and we hope he will be with us for a long time," he told reporters.

"It's not a gamble. We will be playing three games at home (in the AFC Cup) next year and if we draw a capacity crowd of 40,000 at the Hong Kong Stadium we can expect to break even.

"An average ticket for a game is HK$60 ($7.726) and, if we have a full house, we should get ticket revenue of around HK$2 million per game, which is enough to cover his costs.

"I don't know why other clubs don't follow suit and get players who can hopefully take them into the big leagues."