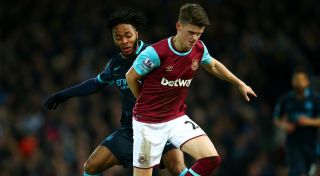 Sam Byram was not even meant to be on the bench for West Ham's 2-2 Premier League draw with Manchester City on Saturday, but he ended up playing 77 minutes as he made his Premier League debut.

The highly rated full-back signed from Championship outfit Leeds United during the week and was a late call-up to the bench for the game against title challengers City.

An injury to Carl Jenkinson forced manager Slaven Bilic's hand to give the 22-year-old his top-flight debut earlier than expected.

"It was unbelievable," he told Sky Sports. "To come on in 13th minute wasn't something I was expecting, but I've dreamt about this moment since I was a little boy and to be able to come on and make my Premier League debut, I'm unbelievably pleased."

Byram said just making the bench was a surprise.

"One of the lads had a bit of a knock in training. That meant he wasn't involved and I got the call up onto the bench," he said.

"I was just pleased to be involved and to be able to come in and see how everything works on a match day.

"I wasn't expecting to come on as soon as I did, but I enjoyed it."

So far, coming up against team-mate Dimitri Payet has proven the the most eye-opening part of life at Upton Park.

"Training has been tough, [Payet is] hands down the best player I've had the chance to play with," Byram added.

"If I can learn a thing or two off him I'll be a better player."