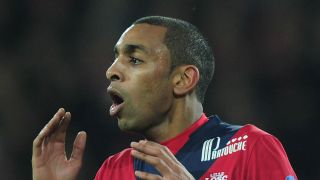 Ronny Rodelin went from zero to hero as his stoppage-time equaliser at Paris Saint-Germain spared Caen the trials of the Ligue 1 relegation play-off.

Rodelin had a penalty saved by Kevin Trapp 15 minutes from the end of normal time, but he pounced from close range to cancel out Adrien Rabiot's 13th-minute opener and secure a 1-1 draw at Parc des Princes that left Lorient third bottom.

Bernard Casoni's side also played out a 1-1 draw at home to Bordeaux, but must now overcome a two-legged showdown with Troyes, who came out third in a similarly dramatic Ligue 2 promotion finale on Friday, to preserve their top-flight status.

Dropping directly down to Ligue 2 are Nancy and Bastia.

Nancy's best hope on the final day was a shot at play-off redemption, having won only one of their past 15 matches.

They turned in a long overdue impressive performance, with Alexis Busin, Modou Diagne and Faitout Maouassa all on target in a 3-1 win over Saint-Etienne.

Lorient's positive result sealed their fate regardless, although they did have the consolation of leaving Bastia in bottom spot – the Corsicans ending a troubled campaign with defeat as Bafetimbi Gomis headed the only goal at Marseille.

Dijon were the other side at risk of the drop but ended Saturday where they started it in 16th after a 0-0 draw at Toulouse, where Martin Braithwaite hit the crossbar with a penalty for the hosts.