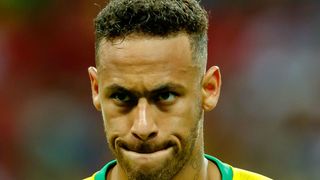 After recovering from a metatarsal injury just in time to make the trip to Russia, Neymar scored twice in five games as Brazil were knocked out by Belgium in the quarter-finals, though he was roundly criticised in the media for his histrionic reactions to challenges.

Cafu, who is Brazil's most capped player with 142 appearances for the Selecao, admitted that Neymar failed to live up to his billing as one of the potential stars of the tournament, but backed the 26-year-old to overcome the disappointment.

"We all expect a lot from the ace," Cafu told Globo Esporte. "Neymar is an ace and we expect him to do different things on the pitch.

"This is normal. It's obvious that criticism is going to fall on Neymar because of what happened. Were Neymar's performance what we expected? No. They were a little below, because from an ace people always expect something different.

"If he has to change some things or not, that's his decision. He knows what's best for his career, for football.

"We have a great player. He is our greatest revelation in the last 10 years, one of the greatest Brazilian players of recent times. The World Cup is unforgiving.

"We want to see Neymar happy, happy, happy because it is good for him and for Brazilian football. He's a smart boy. He knows what he did at the World Cup, what he can do better and how to move forward."

He described part of Brazil's performance in the 2-1 quarter-final defeat to Belgium as "a mistake" on behalf of the head coach, while lamenting Jesus' failure to find the net.

"Although he only made a mistake for 30 minutes, he made a mistake," Cafu said of Tite. "This is fatal in the World Cup, it can result in elimination and put the work in doubt.

"But if Tite continues, we'll support him. There's a lot of work ahead."

On Jesus, he added: "The striker is known for scoring goals. Tactically, Gabriel Jesus was fantastic for Brazil. That is not disputed.

"But unfortunately he went blank at the World Cup, and when the strike doesn't score goals he is criticised."