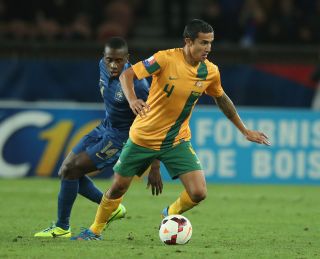 Back-to-back 6-0 defeats to Brazil and France cost Holger Osieck his job as Australia's head coach and sparked calls from past players for veterans including captain Lucas Neill to step aside.

The skipper is refusing to budge and caused uproar when he questioned whether younger players possess the necessary hunger to play for the Socceroos.

Cahill, 33, openly admitted he wants to remain a part of the national team but conceded a youth focus was imperative over the coming years.

"I think it's great that we're looking for an Australian (to replace Osieck) and maybe it will be two of them working together. Who knows?" Cahill, who currently plays for the New York Red Bulls, told Fox Sports.

"For Australia, as long as they've got a long-term plan and not a short-term fix then I'd like to be part of the new journey for the Socceroos.

"But for me the main objective is making sure you get a coach who's there for the process of bringing these young kids through and looking towards the 2018 World Cup qualifiers as well.

"I think for Australian soccer, it's more about the long term - not the short term."

Melbourne Victory head coach Ange Postecoglou is the favourite to replace Osieck, while Mariners mentor Graham Arnold and Western Sydney Wanderers boss Tony Popovic are the other men on the short list.

Cahill believes all three candidates are worthy of the post but was especially effusive in his praise of Popovic.

"To be totally honest with you, I've worked with Poppa - he's unbelievable," Cahill said.

"He's someone I admire as well as Arnie (Arnold). Ange I've met a few times and he's done fantastically with the A-League.

"I think Poppa's the only one of the three that's actually coached in England at a fantastic club in Crystal Palace.

"But the best thing for me, I know him as person, as a player and also a coach and he gives his heart and soul and you can see what he's done in a year at Western Sydney.

"It's the same for Arnie. He's worked with some big players in the game like Guus Hiddink and others and he's been to a couple of World Cups.

"I know Ange is the favourite as someone who's progressed amazingly through his A-League career and obviously has had a bit of Australian coaching (with the under 20s)."