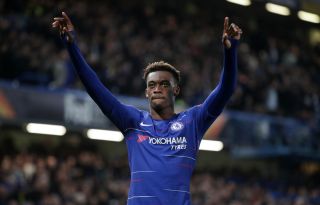 Chelsea winger Callum Hudson-Odoi has agreed a new contract with the club, according to reports.

The 18-year-old England international is currently recovering from surgery on a ruptured Achilles tendon which prematurely ended his season.

A product of Chelsea’s academy system, Hudson-Odoi made 24 appearances and scored five goals in his breakthrough campaign, which also saw him called up to the senior England squad.

Hudson-Odoi had attracted interest from German giants Bayern Munich during the January transfer window, with a £35million offer said to have been on the table.

However, it now appears the teenager is set to commit his long-term future to the Blues, a lucrative new five-year deal said to have been agreed.

Following reports of the contract, Hudson-Odoi posted a picture of himself in action for Chelsea on his social media accounts, without a caption, but which attracted plenty of replies from fans at the expected news.

As we head back to London, we say a huge thank you to our partners @YokohamaCFC, and all our fans for the fantastic support and hospitality we have received in Japan. 🇯🇵💙— Chelsea FC (@ChelseaFC) July 23, 2019

Chelsea have been on a pre-season tour in China, playing Barcelona on Tuesday, as new head coach Frank Lampard looks to shape his team for the forthcoming campaign which starts against Manchester United at Old Trafford on August 11.

The club were not available for immediate comment on Tuesday evening when the reports emerged.