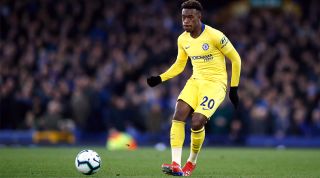 After nearly signing him in January, Bayern Munich have tabled another bid for Callum Hudson-Odoi – and Chelsea have been quick to reject the approach.

Bayern bid £35m for the winger last season, with Hudson-Odoi seemingly keen on the move having been frustrated by lack of first team opportunities under Maurizio Sarri.

However, Hudson-Odoi featured more in the second half of the season, impressing for both Chelsea and England until an Achilles injury in April ruled him out for the rest of the campaign.

Now with Sarri gone and Frank Lampard looking likely to be the new manager, Chelsea are keen to tie down the player to a new deal - his current one expires next summer.

After losing Eden Hazard and currently unable to sign anyone new, Hudson-Odoi is arguably their biggest asset.

Chelsea fans will be pleased then that Bayern are revisiting their pursuit of Manchester City's Leroy Sane, who the Premier League champions value at around £100m.

If Sane returns to Germany to replace the void left by Arjen Robben and Franck Ribery, then Hudson-Odoi is likely to stay put.